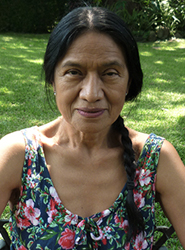 I hold a PhD in Sociology and Philosophy awarded by the Goethe University of Frankfurt, Germany and by  the National Autonomous University of Mexico (UNAM). I founded the Imaginary Studies Program: symbol, art and religion at the Regional Center for Multidisciplinary Research (UNAM). A program I am currently in charge of. I teach postgraduate courses of Philosophy of Religion at the School of Philosophy and Literature Studies. I have been visiting professor at different world programs such as: the Eranos Foundation in Azcona, Switzerland; the Gaston Bachelard Centre of Imaginary and Rationality, France; and the Centre for Imaginary and Rationality Studies Mircea Eliade, Craiova, Rumania.

For more than a decade my work has focused on the hermeneutics of culture, combining the research of the symbolic imagination with the anthropological study of religion and pre-Columbian mythology. In my book Madre Terrible (Anthropos / UNAM, 2007), I make in-depth investigation of the archetype of the Goddess in the thought and cosmovision of Ancient Mexico, taking as its axis the phenomenological analysis formulated by Erich Neumann, a prominent disciple of C. G. Jung and member of the Eranos Circle (M. Eliade, K. Kerényi, G. Durand).

Book author of several volumes: • El Dios andrógino. (2004) • Uixtocíhuatl o el simbolismo sagrado de la Sal. (2012), and • Gilbert Durand. Escritos musicales. La estructura musical de lo imaginario (2018), among others. I have have edited more than 15 collective volumes, the last one: Homo religious, sociology and anthropology of religions,  (2018). In my aim of promoting the study of religion as key issue of the spiritual crisis of contemporary societies, I am editor of the Hermeneutics Notebooks Collection, CRIM-UNAM.

Making the study of religions a component of UNAM curriculum has been one of my personal goals for various years. At present, this area has not been recognized as such. Towards this aim I supervise and organize the work an academic team. My recognition as a member of the EC would undoubtedly contribute to this aim. Becoming a member of the EC would also be an ideal occasion to strengthen the historical ties of Mexico with the IAHR and to link their work to those of other international organizations. The International Network of Imaginary Research Center (Centres de Recherches Internationales sur l’Imaginaire) for example, where I am a permanent member of the Academic Board and, The Gilbert Durand International Friends Association (Association des Amis Gilbert Durand), where I am both a member of the Administrative Committee and I the academic correspondent in Mexico.

As a member of the Mexican Society for the Study of Religion, founded by Dra. Yolot González, Honorary Life Member of the IAHR, it is my intention to strengthen the presence of its members in the IAHR and to reinforce academic bonds which allow us to support each other in the promotion of new perspectives in the scientific study of religion, specifically in Latin America.